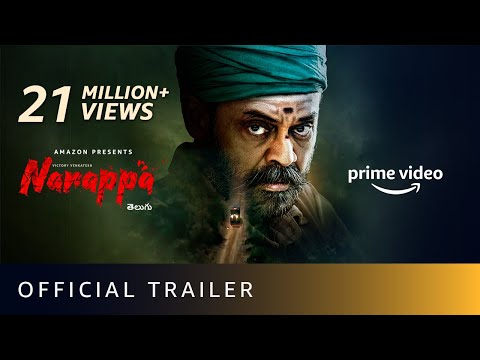 Narappa is the Telugu remake of the Tamil movie Asuran which starred Dhanush. Narappa is set to release on Amazon Prime Video on 20th July 2021.

When Narappa’s son murders a wealthy upper-caste landlord, Narappa and his son are forced to flee in the forest. But Narappa is determined to fight the oppression and give his son a second shot at life. The trailer shows a hide and seek game between the oppressors and the oppressed along with a lot of action. The film deals with issues of casteism and shows the protagonists fiercely combatting it.

Directed by Sreekanth Addala, Narappa stars Venkatesh, Priyamani, Rao Ramesh, Nassar, Karthik Rathnam, Ammu Abhirami and Rajeev Kanakala. The audience has high expectations from this film since its Tamil version was a hit among the masses.